Journey to Nubra Valley north of Leh is special for several reasons. First it is accessed by the highest motor able road in the world traversing the stunning Kardung La at the thin air of 5600m above sea level with views of the Saser Spur, the easternmost outcrop of the Karakoram further north and the Zanskar range and the principal chain of the Himalayas to the south. Second, from the awesome highs we descend to a picturesque valley with an average altitude of 3000 meters and thus a milder climate than the rest of Ladakh. And third, this valley once constituted the last staging ground for the caravan trade with Central Asia. Here started the route taken by the trade caravans, and Panamik, the last village on this circuit, today a sleepy outpost but at that time a busy center, the last major settlement before the caravans plunged into the mountains of the Karakoram and the Kun-Lun on their way to Yarkand, Kashgar and other parts of Chinese Turkestan and Tibet. Today a reminder of this bygone era is the small population of Bactrian camels (Bactria, a satrapy of the ancient Persian empire), double-humped animals, which in the old days were used as pack animals on the Central Asian trade routes when up to 10,000 horses and camels a year are said to have traversed the district. 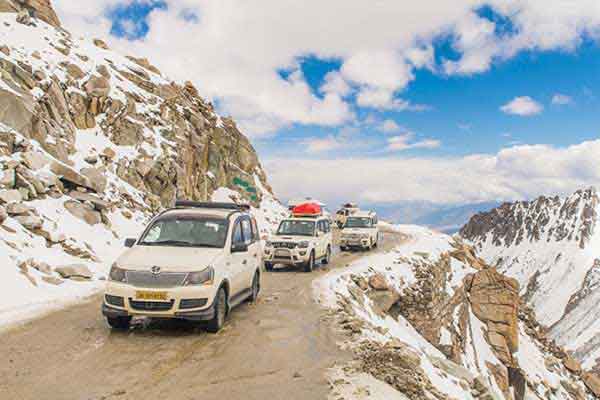