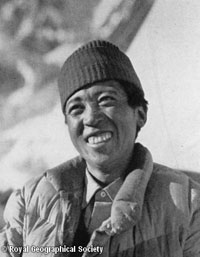 Our grandfather Lt. DA NAMGYAL SHERPA was a famous mountaineer and a member of the first successful Everest expedition team of '1953. He was a climbing pair of the then Expedition leader Sir JOHN HUNT.  The duos almost climbed Everest and were instrumental in opening the route towards the summit of Everest. On 26 May both climbed to 8,350 meters (27,395 ft) to leave a cache of equipment on the Southeast Ridge for the second summit party of Hillary and Tenzing Norgay. The summit was eventually reached at 11.30 am on 29 May.

He is among the first Instructor of the pioneer mountaineering institute “Himalayan Mountaineering Institute’ established in Darjeeling on 4 November 1954. The Institute is world-famous and encourages mountaineering as an organized sport.

Lt. DA NAMGYAL SHERPA was regarded and given the title of a “TIGER’S OF SNOW” along with a few of his Sherpa friends of the 1953 successful Everest expedition team. He continued leading the expedition team to many of the highest mountains around the world including Sikkim and dedicated himself to working for the HIMALAYAN MOUNTAINEERING INSTITUTE in Darjeeling as a Senior Instructor.

Mountain Tours and Travels is a company dedicated to him by his two sons Passang Namgyal Sherpa and Ang Sherap Sherpa along with his grandson Mingma Tshering Sherpa as a tribute to his Vision, Hard work, Passion, and Love for the Mountain.