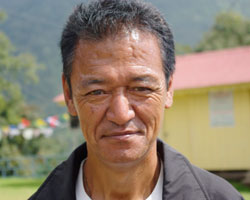 Some of the peaks he had in his belts are FREY PEAK, SIMVO, BIDHAN PEAK, RHENOK PEAK etc...All of those peaks are 6000m and above. Apart from scaling the summit of the mountains and peaks in sikkim and other himlayan region, what satisfy him most is that many of his students who have learned under him have scaled many of the highest mountains of sikkim and the world including the mighty Mt. Everest, K2, Kanchendzonga Lhotse etc in the recent times Ang sherap sherpa is a second son of a renowned mountaineer Lt. DA NAMGYAL SHERPA, who was the member of the first successful Everest expedition team of 1953 and was the expedition partner of the then Expedition leader Sir JOHN HUNT.

Ang sherap is a passionate sherpa and a real mountaineer. His passion and love for the mountain and adventure is within his blood and that has made him kept alive his never ending relation with mountain and Himalayas even after his retirement from the Institute. Now a days he works along with his son Mingma in there home office and runs a family travel and tourism business.He can sleep with ease in the tents or in the comfortable hotel room. He is a passionate sport person and love to play and watch all sports. He works tirelessly for his clients and there satisfaction is his ultimate goal.

He can occasionally be spotted in his terraced field with his wife, if not working in his office with his son. He is a perfect loyal and charming husband. He is a husband to a beautiful wife DAWA PHUTI and proud father of mingma and namgyal sherpa.

An elder brother to Ang Sherap Sherpa and a senior and a retired Instructor of the Himalayan Mountaineering Institute, Passang Namgyal Sherpa was a passionate and experience mountain Instructor and climber. He was regarded as one of the best hard working and charming senior Instructor of the Himalayan Mountaineering Institute who had all the knowledge in the world. He had scaled numerous peaks and mountain in sikkim and other region of Indian Himalayas, which includes KAMET, FREY PEAK, BIDHAN PEAK, SIMVO AND RENOCK PEAK. He also had an unsuccessful but brilliant attempt of Mt. Everest in Nepal and Mt. Kanchendzonga in Sikkim during his best days. He is one of the Inspiration behind the establishment of the Company.

A master degree holder in History (Hons) and a Bachelor Degree holder in Tourism from the North Bengal University, Mingma is an only son Of Ang Sherap Sherpa. A passionate and enthusiastic adventurer, photographer and mountaineer in sikkim who had numerous trekking and tour experience in sikkim and other region of Indian Himalayas. He is a main person behind all the official and adventurer works of Mountain Tours and Treks in sikkim.